Climate change, a wave of refugees and poor planning are draining water supplies in Jordan.

Silt crunches under Reda Al-Younes’ shoes as she descends into a sun-baked mudflat in eastern Jordan. She crouches and, with her finger, traces a distant memory of a time when water brought life to this part of the Azraq oasis.

Al-Younes maps out the former channels and pools in the mudflats where she spent her summers more than three decades ago, before she moved to the capital, Amman. She and others in Azraq’s Druze community dug wells by hand to extract saline water. Channels guided it into shallow pools to evaporate, leaving salt that the Druze sold, Al-Younes explains, as she follows the diagram with her finger.

With winter rains, the water table surged and the mudflats flooded. The Druze decamped in October for higher ground until May, when the water retreated and they returned to the mudflats. They grazed small herds of cows and sheep in Azraq’s lush, spring-fed marshes.

“I loved the oasis,” she says, her voice taut with nostalgia.

Half a century ago, Azraq was legendary. Historical photos show ponds flanked by thick clusters of reeds and squat date palms. A shot from 1965, which hangs today in a local lodge, shows a man waist-deep in Shishan Pool. He is fishing, his net suspended in mid-air. All of this — Azraq’s mudflats, marshes and pools — depended on reserves of underground water replenished by yearly rains. In the early 1980s, Jordan’s government began drilling wells near Azraq and pumping millions of cubic metres of water annually from the aquifers — underground layers of porous rock and sediment. Farmers began unfettered pumping of their own.

Soon, the aquifer was losing water faster than rains could refill it. In 1987, the springs that fed the two main pools in northern Azraq stopped flowing. By 1990, the pools dried up. Today, the water table has dropped from the surface to tens of metres below ground. This is happening not just in Azraq, but in aquifers across Jordan.

The plundering of Jordan’s groundwater alarms scientists who are studying the country’s current resources and forecasting future changes. Jordan gets nearly two-thirds of its water from aquifers, and the supply is not sustainable, they say. Global warming has already hit the Middle East hard, and projections indicate this region will suffer profound problems in coming decades as rainfall grows more unpredictable, rising temperatures accelerate evaporation and the land grows drier.

Climate change isn’t the only problem that will stress Jordan’s limited water resources. The country has a rapidly growing population, which has swelled with refugees from adjoining nations, most recently some 660,000 Syrians who have fled civil war, according to the United Nations. And Jordan lacks the rich oil and gas deposits that many of its neighbours have, which limits its ability to pursue expensive options such as desalinating seawater. On top of that, decades of lax policy have allowed the plundering of its water supplies. The combination has rendered Jordan one of the poorest nations on the planet in terms of its water resources — and its struggles offer a window onto the issues that other water-stressed nations are increasingly facing. 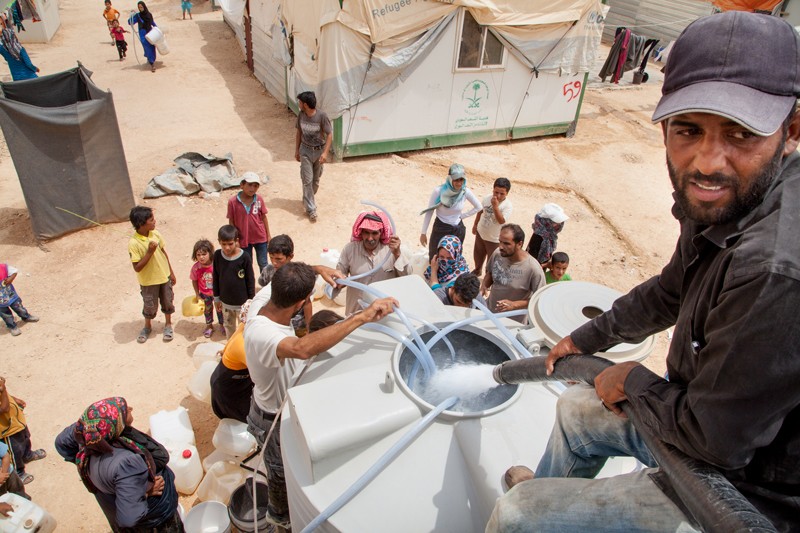 Marwan Al-Raggad, a Jordanian hydrogeologist who taught at the University of Jordan in Amman until last year, fears that the country will exhaust its groundwater in the foreseeable future. “Fifty years from now, we’ll be pumping from the bottom of the aquifer,” Al-Raggad predicts, referring to Azraq. He and a handful of other scientists are scrambling to map Jordan’s remaining water and project future changes, but their efforts are being hampered by a lack of quality data and limited financial support.

Elias Salameh, a hydrogeologist at the University of Jordan, agrees that time is running out. “We don’t have any additional water resources from within the country to be developed,” he said. “Almost everything is captured now.”

Most of Jordan is a toasted expanse of desert, where less than 50 millimetres of rain fall each year. Only nine countries in the world receive less annual precipitation than Jordan. And it ranks fifth in nations facing the greatest water stress, according to an analysis released last month by the World Resources Institute.

Steven Gorelick, a hydrogeologist at Stanford University in California, who has done extensive research into Jordan’s water crisis, says that, with so few new options for fresh water, the country “will be centre stage in showing how a semi-arid region deals with the devastating impacts of a warmer and drier regional climate.”

I travelled across Jordan in summer 2018 to explore how researchers are studying Jordan’s water crisis, and to learn how the government is responding. The country’s most precious liquid resources lie in aquifers in a dozen main groundwater basins. Wells that tap the aquifers supply nearly 60% of the water consumed in the country, with the rest coming from surface-water supplies such as the Sea of Galilee and the River Jordan (see ‘Without water’). Some 45% of the water usage goes to agriculture. Meanwhile, municipal water networks lose roughly half their water to theft and leaks.

The aquifers beneath Jordan function like a bank account, albeit with a finite capacity. Rains deposit water into the aquifers, and springs release the excess. Salameh says that Jordanians are depleting their account by extracting much more water than gets added to the aquifers each year. The situation is even more dire for non-renewable aquifers, which rain cannot replenish. Once that water is taken, it is gone.

The government has long recognized that the country is spending its water resources much too quickly. Of Jordan’s 12 groundwater basins, 10 are being pumped at a deficit. Overall, groundwater is being extracted at twice the rate that it is replenished, according to the Jordanian water ministry. At this pace, the looming question for Jordan’s aquifers is not if they will be depleted, but when. It’s a challenging problem, given the available information and the uncertainty of climate change. In official planning documents, the government has acknowledged that it needs to improve its groundwater-data collection, analysis and monitoring.

“Are the values collected from groundwater wells — private and governmental ones — accurate?” asks Al-Raggad. Pumping from illegal wells isn’t accounted for, and natural springs are not all monitored either, he says between sipping coffee and rolling cigarettes during an interview in his office. Near the door stands a flow monitor that closely resembles a rocket-propelled grenade launcher, which, he says with a shake of his head, has led to misunderstandings when he’s working out in the field.

Of the challenges facing Jordan’s water sector, climate change presents perhaps the most uncertainty. Part of the problem is the country’s location. “The effect of climate change on the Mediterranean in general — and the Middle East is part of it — is much more severe than any other part of Earth, and we don’t completely understand it,” says Yochanan Kushnir, a climate scientist at Columbia University’s Lamont–Doherty Earth Observatory in Palisades, New York.

That makes rainfall and aquifer recharge less predictable, which greatly challenges efforts to manage resources today — let alone plan for the future. Al-Raggad is among those trying to gauge the impacts of climate change on groundwater in Jordan.

He starts by taking the results from global climate models used by the Intergovernmental Panel on Climate Change. Then he scales them down to the regional level, using statistics of past temperatures and other climatic variables to determine how global phenomena affect local conditions, such as rainfall amounts. These regional simulations provide information about how climate change could affect local aquifers in Jordan. In one case, Al-Raggad and Salameh, along with three colleagues from German and Austrian universities, found that by 2050, an important aquifer in the north could receive 37% less recharge through rainfall than it does today. With continued over-pumping, the amount of water in the aquifer could decrease by 40–90%, according to unpublished work they presented at the European Geophysical Union meeting last year. The researchers found a similar pattern for another of Jordan’s main aquifers.

This means that even as Jordan continues to take too much water from aquifers, the amount by which nature refills them is also shrinking. “We need to reconsider the effects of climate change on a yearly basis on our water management,” Al-Raggad says.

Many other questions remain. Climate modelling doesn’t address the quality of groundwater, which can become too saline to use before an aquifer runs out. And there is considerable uncertainty about the climate projections for the globe — questions that are magnified for any individual country.

Beyond questions about the amount of rainfall, researchers are also trying to forecast how patterns will shift. Haim Kutiel, a climatologist at the University of Haifa in Israel who analyses rainfall in areas around the Mediterranean, says that in studying climate change, when and where rain falls is as important as how much.

Fifty years ago, rain came regularly, starting in mid-September and lasting until late spring. “And that was the rainy season,” Kutiel says. Now, the rains are sporadic and unpredictable. “You could have a huge storm in October and then no rain for six weeks,” he says.

Ofira Ayalon, an environmental scientist also at the University of Haifa, agrees: “We have to realize that when we’re talking about climate change, what used to be the pattern will not necessarily be the pattern.”

Uncertainty about climate change affects all parts of the globe, but the problem is particularly acute in Jordan because the country lacks consistent, high-quality data that allow scientists to better understand current conditions, such as how much precipitation is recharging individual aquifers.

“They usually say, ‘We received 20 millimetres of rain on this day,’” Al-Raggad says. “But we don’t know: was it along the whole day, a few hours, one hour or five minutes? That’s a big difference for me, as a hydrogeologist.” Denser rainfall means more floods, more evaporation and less recharge, he explains.

Government data have grown more precise ever since the ministry shifted three or four years ago towards monitoring precipitation in real time, Al-Raggad says. But the historical data will remain as they are.

All of these trends raise the question of what will happen when Jordan exhausts its dwindling water supplies. Some researchers have warned that water shortages can lead to war and massive refugee crises. In a bombshell paper from 2015, Kushnir and others blamed a record drought in Syria for helping to spark the civil war that began in 2011 (C. P. Kelley et al. Proc. Natl Acad. Sci. USA 112, 3241–3246; 2015). Climate change exacerbated the drought, which lasted from 2007 to 2010, prompting crop failures and a mass influx of rural farming families into cities, thus igniting the war, they argued.

They added that decades-long policies promoting unsustainable agricultural production, which depended on overexploiting groundwater, didn’t help. The paper simultaneously drew praise for linking climate change with conflict and criticism for lacking nuance, with other researchers challenging its primary conclusion. Its findings about groundwater drew little attention at the time.

Although researchers don’t know why this area is unusually sensitive to changes in climate, they recognize that in any arid region, a drop in rain will have disproportionate impact. “Small changes in rainfall can make a big difference for human beings, and it’s been like that throughout history,” says Kushnir.

Rising temperatures are happening as Jordan’s population is growing rapidly, from less than 6 million people in 2006 to around 10 million today. The country continues over-pumping groundwater, and Ali Subah, secretary-general of the Ministry of Water and Irrigation, blames the need to do so on the sharp increase in the number of refugees.

Where will the ‘water wars’ of the future be fought?

OIC Conference of Ministers Responsible for Water kicks off in Istanbul

Types of Spillways and Classification